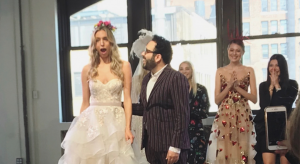 Bridal Fashion Week made the headlines when a dentist,Chad Stapleton proposed to his model girlfriend, Nicole Kaspar on the runway at the Watters Bridal Spring 2019 show in New York. After the show, Kasper attempted to leave the runway but she was stopped only to see her boyfriend, Stapleton on his knees with a ring in his hand. Her jaw dropped and the audience were all gushing with smiles while they pull out their smartphones to capture the moment when Stapleton was down on one knee. 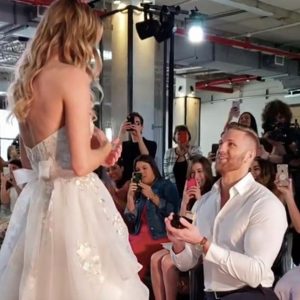 “Nicole, I’ve wanted to do this for a long time, and I wanted the moment to be as special as you are to me,” said Stapleton. “And I figured what better way to do this than on a runway, doing what you love”I never really believed in love at first sight, but I have to admit, it was something different the first time I saw you,” he said before pulling out the ring.
He continued as Kaspar began to tear up. “I felt something inside that I’ve never felt before that I just couldn’t explain.” He continued, from that moment until now, you’ve made me happier than I ever thought I could be. If you let me, I’ll spend the rest of my life making you feel the same way.” 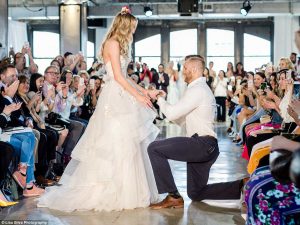 Kasper nodded in agreement to the proposal as Stapleton slid the ring in her finger and the audience screamed in excitement. The model later took the moment of proposal to her instagram and she captioned the video, “Well that’s a face I’ve never made before FINALLY RETURNING HOME TO MY FIANCÉ after this crazy week in NYC and let the planning begin you got me good.” 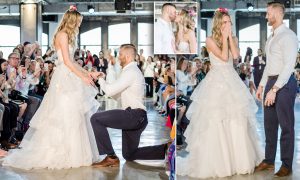