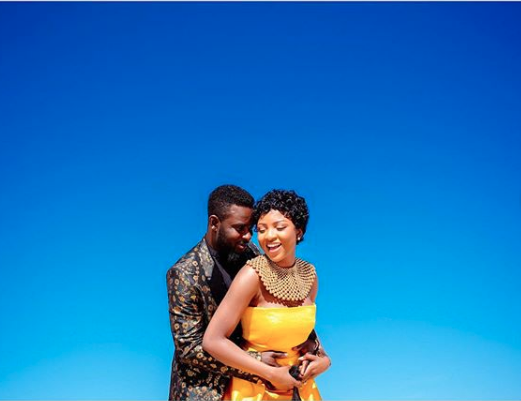 After meeting at a mutual friend’s 30th Birthday party, Tola Olayanju of Charis’ hair and Dimeji is getting ready to take the next big step. Apart from their unique love story, their pre-wedding photos in Sossusvlei in Namibia is simply breathtaking. The couple ticked all the boxes as they both looked extremely fabulous in their exquisite outfits.

Tola who was blown away by Dimeji’s thoughtful proposal in Venice shared how they met when she disclosed that: “The first time I saw Dimeji (Israel)) was at our mutual friends Lara 30th Birthday party in 2017.

I actually didn’t want to attend the party because I had only just joined my church, Royal Connections a coup,e of months earlier, and I didn’t know many people. I probably just made a couple of friend at that time, so it was rather awkward for me. Lara invited me a week before and said it’s an Ankara themed party, so come in your trad wears, Of course, that even made it harder for me to attend cause I was thinking it’s not that deep (lol).

Fast forward to the party, which was on a Sunday straight after Church, I took my Ankara along to Church as I don’t like to turn down people invite…Once church service was over, I was prepared to boycott the party. As I was heading to go home, I ran into a randoguy at the church foyer.

He had this breathtaking cute smile and he was staring right at me. I was thinking, “Ermm why is he looking like he knows me, this is going to be as I’m definitely not who he thinks I am”. This is because I was a new member and no one knew me. He enthusiastically said Haaiiii. You are Charis Hair, aren’t you? Immediately thought “I’m right! He knows Charis Hair not me” lol! So I replied with a rather professional smile

“Oh yes!…. Did I style your wife’s hair? I was so certain that I did’…How else would a guy know about Charis Hair if it wasn’t that? He quickly replied “Oh no no no no, I stumbled across your work a couple of years ago on Facebook and I have to say you are very talented and creative.

Well done!” I still remember everything he said that day, word for word because I was quite shocked that a man could take so much interest in my hair creations, even without knowing me. It was the first time and it was certainly different…

Whilst I was still trying to take it all of that in, he added: “you are very gorgeous; I love your dress”… I was wearing a red dress and a black turban. Moving on, the convo finished and I walked towards the door and stumbled upon onef my best friends, Tina.

Emotionally blackmailing she said, “ Tola please come with. me to the party, haha, but first I’m going to have a quick rehearsal with Dimeji, inside the church (Unknown to me, who Dmimeji was), we will go together”.

Somehow I gave in to her blackmail and went to the bathroom to change my outfit while she went to rehearse with this ‘random Dimeji”. About an hour later, the party was starting, I walked over to the party venue just across the road from the Church building. I was one of the first people to arrive at the venue which s never happened before!

Lol…I sat right at the front with Tina as she was doing back-up vocals for the artists that night. Of course, I felt out of place and so I sat rather quietly. At some point during the party, Lara introduced her musical mentor and very good friend of 5000 years, Dimeji.

He stepped out with his guitar and once again with that really cute cheeky smile. For a minute, I was like Isn’t this guy I met earlier? Oh, it’s him! Oh, he’s the Dimeji Tina rehearsed with…So I smiled. I honestly wasn’t thinking anything at that time.

Even though some monitoring spirits like Kemi Samuel-Onalaja thought my eyes were fixated on him with keen interest from the beginning and she was wondering “Who’s this new girl staring at my friend like this? Oh please! At some point at the party, I went to the toilet and he was coming out and saw me!

He was surprised that I was at the party because he didn’t think I’d know his friend..long story short, during the party, he interrupted my conversation with a friend. He said: “I’m a friend of the church and I ‘ve been for over 20 years and I have never seen you. I said I’m new and he asked about Lara and Tina. We talked for 20 mins and he got my number.

He called the next day or so and I thought ok, maybe he’s looking for something. We spoke for a couple of hours. Then he didn’t call again for another 3 weeks. I was convinced the first call was just a brotherly-sisterly thing. Of course, I completely forgot about him as I was sure I’d never see him again.

Well maybe till Lara throws another party again. He called after 3 weeks and I just couldn’t be bothered and it led to me keeping him on hold got like 6 months. He never forgave me for hanging him for so long like that and after six months of telling himI’mm not free, I finally said yes and got hooked for Life! what was an epic story!