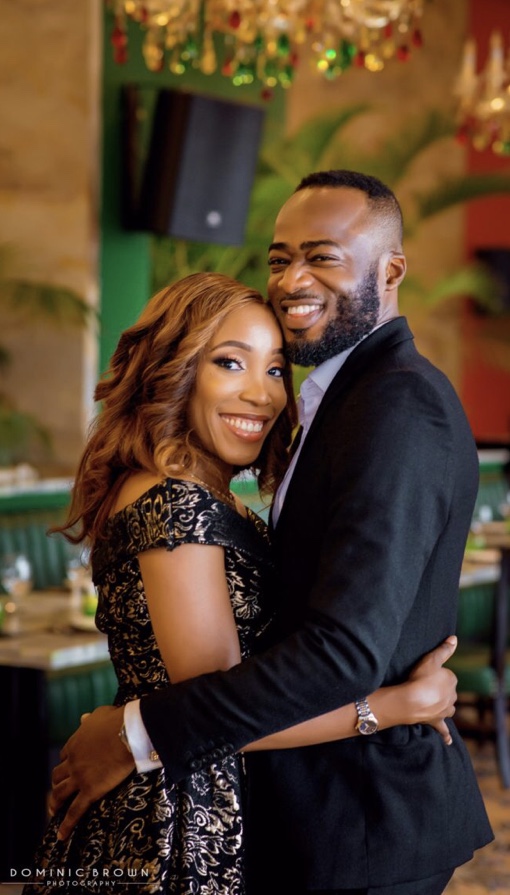 Nowadays, good things and marriages seem to start right from the brother zone hood. She studies him for a while, he studies her for that period too, all the while unknowingly catching feelings and baammmm! He proposes. Lore brother zoned, friend zoned, back to brother zone Uche till they both finally realizes they are sleeping on the manuscript of one of the best love story ever! So according to the bride-to-be Lore, here’s how the show went down….

It was the summer of 2008. My sister and I had just relocated to Nigeria from the States and we had signed up for the mandatory National Youth Service. At orientation camp in Kubwa, we met a lot of great people and I was introduced to Uche by another corper. When I met him, he was extremely quiet and didn’t say much but I knew he took to me. We spent a lot of time together on camp as friends and after service, he maintained a close relationship with my family and I.

I introduced him to everyone as my brother, since we spent so much time together and he was present at almost every family function. Even when I would go on dates with other guys, I would leave him at the house watching TV with my brothers or hanging out with my parents. For me, he was my brother and I was his “Little Flower,” as he used to call me.

In 2010, I moved to the UK to pursue my Master’s degree and Uche had moved to the States, where he lived for seven years. We still maintained contact, although infrequent, and he visited me in the UK and also met up with me when I traveled to the States a number of times between 2012 and 2015. After coming back to Nigeria in 2012, I lost my beautiful, amazing mother in December 2015. While Uche came to pay his respects to my late mom, who knew and loved him as a son, I didn’t even notice he was there.

2016 was a year of transition for me and we pretty much lost touch. Around the end of 2017, I happened to view one of his SnapChat updates and it appeared that he was in Nigeria. I sent him a DM and he confirmed he had moved back to Nigeria in November, the previous month. Coincidentally, I was to spend my first ever Christmas in Lagos that year and I had a great time. A few days before I was supposed to go back to Abuja, we decided to link up. He came to where I was staying and we just had an instant connection that had never been there before. That evening, we went on an impromptu date to Hard Rock Café and we spent hours talking and catching up.

He convinced me not to go back to Abuja when I planned to and took care of my accommodation. While spending time together, he opened up and shared that he had a date, which was scheduled before I came into the picture, with another girl who a friend had tried to hook him up with. So, I helped him pick out a nice shirt to wear and sent him on his way. As fate would have it, the date went decently well, but nothing came out of it. It was now the 31st of December and he offered to meet me in the church to pray and cross over into the New Year. That’s when I knew my “brother” in the friend-zone was going to become my boyfriend ☺

In the spring of the next year, we went on vacation to a number of countries in Europe. Everyone who knew about us had hyped me that he was going to propose on this trip so I had gotten my nails and lashes done. However, it didn’t happen, and to be honest, I was not amused by the disappointment. Fast-forward to a few months later, he took me to dinner at a boutique hotel in Lagos. The day before that, he said he wanted to treat me and took me to an over-priced place to do my nails, to which I obliged

After taking our order, we had the opportunity to look around the hotel while we waited. We were shown a number of lovely rooms and as we were going back to the restaurant, we were told that there was one last room that we hadn’t been shown. When I walked in, there were petals on the floor, music playing, and candles everywhere. On the bed were letter balloons that said, “Will You Marry Me.” He also went the extra mile by having a professional photographer in a corner capturing the moment. He got down on his knee and gave a long speech that I didn’t even hear because I was in shock. Then he looked me in the eye and asked me to be his wife.