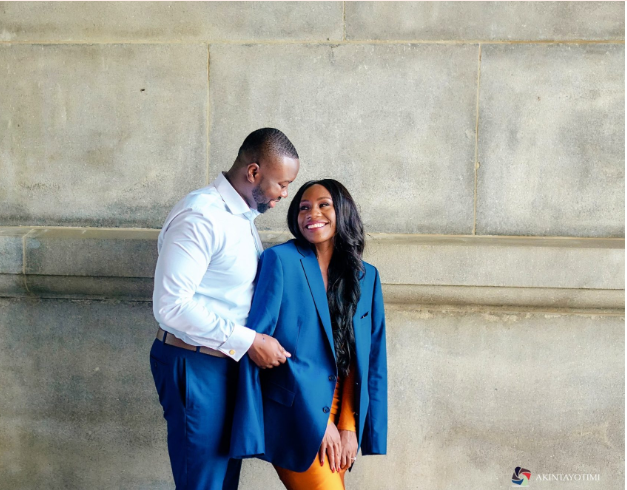 Sometimes we wonder if couples ever just sit down and wonder what would have happened if they didn’t go out on the day they did, or if they didn’t take 20 steps forward or backward the day they met the love of their life. How exactly would their love story turn out? But we know cupid has a way of doing his thing, so definitely two lovely hearts would meet when its the right time to. This exactly is the case of Sam and Busola, their first meeting wasn’t all that pleasant but their first date was the charm. Sam knew Busola was everything and she was! Read their love story as told by Busola below..

“We met at a mutual friend’s cookout the summer of 2015 – it was Memorial Day Weekend. I was in the kitchen chatting with my girlfriend, when Sam comes and interrupts our conversation. I think someone at the party told him I was a pharmacist and he was about to graduate pharmacy school himself, so he introduced himself and kept talking. I didn’t really feel like talking about my work at a party, so I admit I was super cold until he got the hint and left us alone. Later that year, my friend had a game night at her house and Sam showed up with some of his friends.

I immediately felt bad about how cold I was during our last encounter and wondered if he recognized me. Well, he went the whole night without even looking in my direction, so I figured he forgot. The next year, the summer of 2016, we randomly friended each other on Instagram and then snapchat, and after a while he sent me a message. I was excited, especially because I knew he forgot about our first encounter.

We chatted on the phone for hours. We’re so similar yet so different. Sam is very talkative, and I’m a bit more reserved and shy. But the conversation was so easy-going, and we really hit it off. Then, on our first date, we went to a Thai restaurant and the first thing he said was “you know we met before right?” Busted! I immediately apologized, but he was so cool about and we had an amazing date!﻿