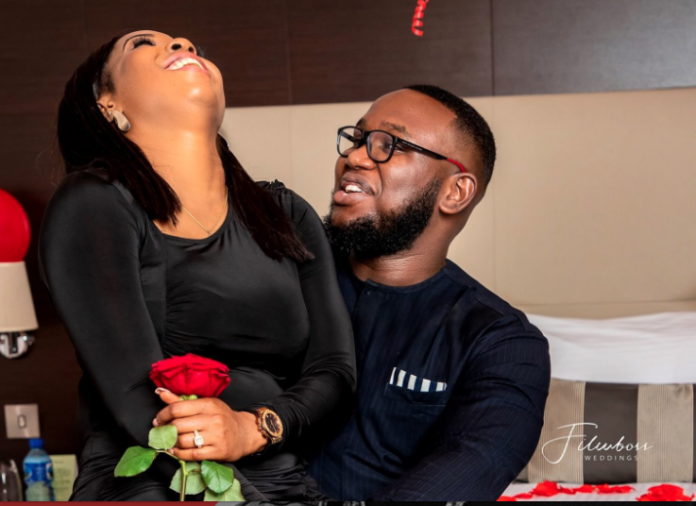 It was lovers day and Ada woke up thinking it is going to be just like every normal lovers day. Gifts and love yeah, nothing big or shocking, but she was wrong, she got the biggest surprise ever! Obinna proposed and it was just perfect. Ada shared her love and proposal story when she said:

“It all started 6 years ago on my birthday when Obinna came with a friend. My room was full because my friends came to celebrate with me, so only his friend came in to say hello. I went out to give Obinna a portion of cake and a drink, but I couldn’t see his face because it was dark. Apparently, from that day, Obinna started making inquiries about me ( I know this because his friend told me), but I wasn’t interested so his friend kept stalling him.

Fast forward to 2 years later, I was out with some friends. I noticed a guy staring and thought to myself, “Oga you better talk and stop staring”. It was almost like he heard me, lol. He engaged me in conversation which I got totally engrossed in. After our drinks, we exchanged phone numbers and he dropped me off at home. He went ahead to tell me he had been to my house before, much to my shock and amusement.

I told him it was impossible, then we brainstormed for a bit and realized Obinna was the same guy I gave the cake and drink to on my birthday! About 3 months passed and he didn’t call and neither did I. I uploaded a lovely picture one day *winks*. He saw it and chatted me up, asking for a date. We met sometime in November 2014 and that was the beginning.

On Valentine’s day of 2019, I thought he was just being extra. Everything was well thought out. From the gift and a bottle of wine and handwritten note he dropped off in the morning saying how blessed he was to have me, to the elegant dinner by the poolside later in the evening, I was so sure the evening couldn’t get any better. I got tired and we decided to retire for the night, and that was when I received the greatest shock of my life!

The room had everything! lol. Candles, balloons, roses and a huge “Will you marry me?” Written in rose petals. I practically ran out of the room. He held me back, got on his knee and opened the box which had MY ring in it! My heart melted, I was stunned and speechless. I didn’t know what to say, but I knew my big answer was “YES”.