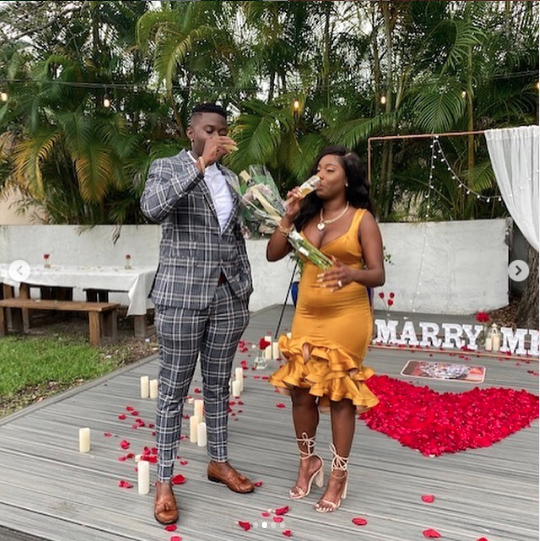 Shanelle had taken a break from work to go for a vacation in Miami. As it was their 5th anniversary in love, she and Andy decided to have a photoshoot. The part she however, missed was that she would leave Miami with a changed status.

Led by the hands of her man as she though the photoshoot required, unsuspecting and naive, she was brought to a love garden specially prepared for her, while friends and loved ones hid themselves with cameras, ready to capture the blissful moment. Candles, petals lifted the spirits of the morning.

Amazed and dumbfounded, lost for words and short of expression – all of these are lesser to what she must have felt! Andy then took her hands gently, professing his love and expressing his feelings.

His profession almost took forever but the words resonating in her ears made her wait patently, smiling, nodding and blushing. At the end, her beau popped out the big question, presenting the diamond ring to her on his knee. Wuuuuuu goes the screaming from friends – she simply accepted like she’s been waiting for it!!

“Woke up and I’m still in shock. My finger feels different 😂. I came to Miami as a break from work and to celebrate our 5-year anniversary with a Photoshoot. Who would’ve thought I’d be leaving Miami as a fiancé ❤️❤️❤️”, she wrote on IG.

I SAID YES‼️
If you would’ve told me an uninvited guest (Andy) at gathering would’ve blossomed into this, I would’ve looked at you crazy. I’m so thankful that God blessed me with a man who is willing to go above and beyond for me. Andy met me at a time where I was broken and instead of running or backing down, he stepped up to the plate and showered me with persistent, unconditional love from Day ONE.
He made the effort to mend my broken heart piece by piece for 7 months before asking me to be his girlfriend. After that Andy continued to knock down walls and jump through hoops to ensure my happiness. And that shows.. during COVID & the unfortunate state of the world, my fiancé still managed to put together the most beautiful moment with some of the people I love the most. I’m so grateful that I get to spend the rest of my life with him. I get to build a powerful, impactful life with my other half ❤️❤️❤️