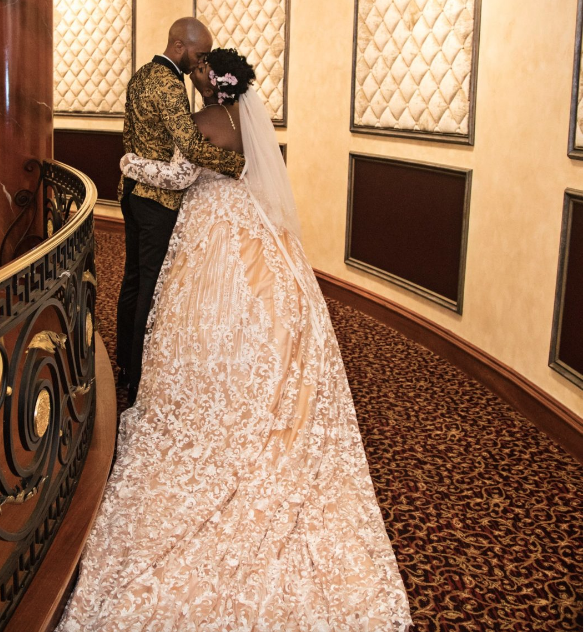 Erna and Donald who recently walked down the aisle together have the most beautiful love story ever! Unexpectedly, they found love, and now, they are empowered and energised to journey down to forever together, isn’t that beautiful! The beautiful Liberian Lebanese bride Erna shared all the details of their love with us when she disclosed that: He was in the Army and this was his second week in the country. Being the outgoing person I am, I showed him around downtown Daegu, introducing him to the best places for late night snacks and the best hangout spots. After walking and talking for hours we went our separate ways. The next morning, I got a good morning text and that week we spoke on the phone for about 6 hours each night. I thought, “Wow, he must really like talking to me because I know he has PT early in the morning”. That Friday, we hung out and spent every day together the two months prior to my trip. The funny thing is that during my travels throughout Southeast Asia I met so many people and topics like relationships came up. Even though I had known Donald for two months I knew that he would one day be my husband. Yes, I got questions like “How do you know this?” “Are you sure?” “It’s so soon!” but I knew. God designed Donald for me. They say when you know, you know…and that is definitely true. Donald is hands down the most supportive, loving and selfless man I have ever met. Our love story has come full circle – meeting in September 2011 and getting married September 2018! On the simple proposal she had, Erna revealed that: “I know that Donald planned a beautiful proposal but due to roadblocks and traffic, it didn’t go as planned. But you know what; I think that the proposal happened the way it was supposed to. It was intimate and felt so natural. He started explaining how he wanted the night to go while I was getting ready for bed and when I turned around I saw him on one knee”. I don’t know where the tears came from but they just started flowing. I can’t belive I cried! I was filled with so much joy I couldn’t stop hugging him. Of course, I called my mom and to my surprise, she already knew. I was shocked I asked how she could keep this secret from me. The most memorable moment was the look in Donald’s eyes when he was on his knee. I saw so much love in his eyes and it was that love that came over me at that moment and filled me with so much joy.