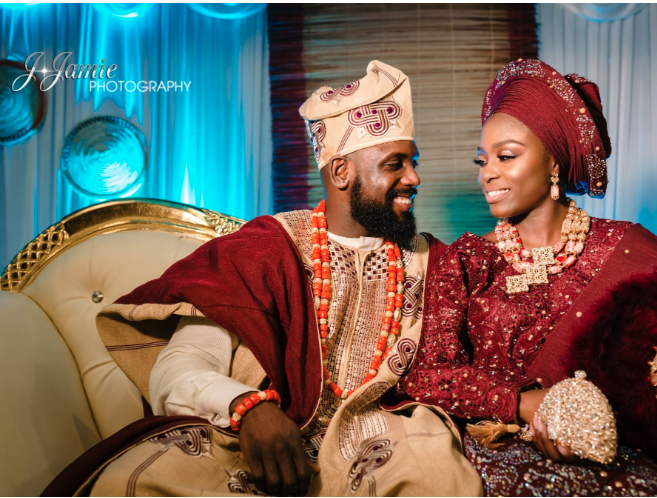 Okay, prepared to be blown away with excessive beauty from this traditional wedding feature. Samuel and his darling bride, Abidemi looked flawless on their tradidtional wedding day in London. Their outfit not only caught our attention, their love story had us gushing really hard, true love truly exists, you may find them in places you least expect. Their sweet love story from the groom, Samuel goes thus:

“I was the vice-president of RY Trentside and part of the choir playing the keys. Abidemi joined the choir and I didn’t even look at her twice but the first time I properly noticed her was when she led a song during practice for one of RY’s major events. So as a VP and a fellow choir member I had it in mind to remember her name because I don’t like not knowing people’s names.

Fast forward 4 months later, GVC had their anniversary programme and we were both a part of the mass choir obviously but something interesting happened on the first day of the event. One of my closest friends told me in the morning to “open your eyes well to see Abidemi. She is an interesting person and I see you guys together.

I thought to myself “The small youth that likes to wear make-up all the time with her friends? Why her?”. Not going to lie she was looking quite buff some days I’ve seen her and also thought to myself previously “What if Abidemi was my future wife?” and I was like no, that’s so random, so she can’t be. So, when I remembered that, I began to pray, speaking in tongues and everything. It got so serious I included my family into this asap.

I wanted to be practical and get to know her so on the 2nd night of the church programme I decided to walk her and her friend to the bus stop with one of my boys, wait for the bus with her, got the digits and told her to let me know when she’s home. She did let me know and then the game started. A week went by and Abidemi was not playing games, she straight up asked me “What do you want from me and this friendship?”, and I looked at my friend and was like “It’s about to go down!”.

Then I Told her how I felt about her cause at this point I really liked her and felt at peace in my spirit that she is the woman for me. Now here I am, about to marry my best friend, my one and only and prayer partner. It’s been such an amazing journey up to this point and I can’t wait to start the next chapter with her, full of laughter, tears of joy, happiness, favour, and love with Christ being the centre of our marriage!