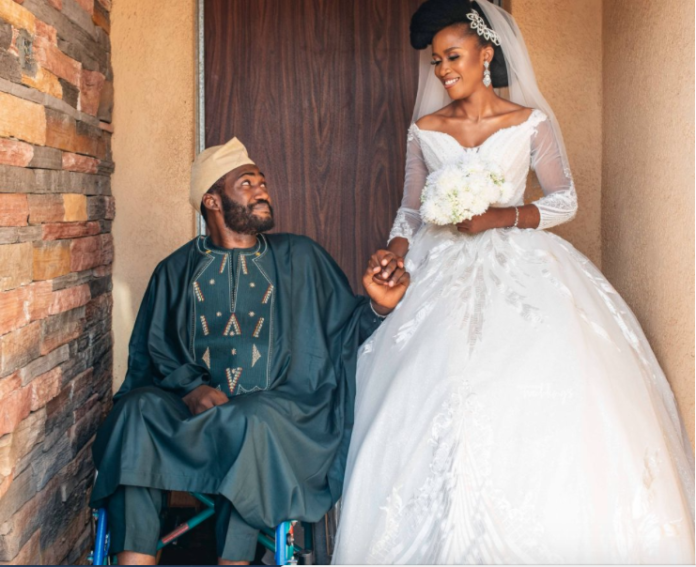 This is a long read but it is definitely worth it. For those who don’t believe in the existence of true love and the beauty of marriage, Sozo and Joshua’s story proves the sweetness of love. Read their story as told by the groom.

I met Sozo around September 2015. My cousin had just come visiting from Abuja to Zaria where I was with my mum. Apparently, my cousin Eka had come with Sozo and another friend of hers. I saw Sozo but at first, she wasn’t my kind of girl, looked annoying, had little bow legs and looked too serious. I think I still had my head up in the clouds so I didn’t see her well. Well, I came back to Abuja much later and met her again and we became friends. We built a real friendship from there. I thought it was time I got serious with my relationship so I took out time to pray about my life partner. I had conviction and I simply got a ring.

On the 25th of December same year, I came over to her and simply slipped a ring into it without her consent. Well, we were so real as friends, so she laughed and we flowed like that. We grew to like ourselves too much before we fell in love. We simply were so real and true with ourselves. Around October, we travelled to Jos to see her mum who was battling breast cancer then (we eventually lost her).

While, Sozo and I were with her and I thought it was time to slip the second ring. I went on my knees in the hospital and asked her to marry me in front of her mother after her mother had finished teasing me that I was behaving like an expecting hen when she saw my restlessness before proposing. We needed to be back to Abuja for an exam and catch up on some programs.

On our way back, just an hour into Abuja at Kagarko, we had an accident. It was a public vehicle but we three -Sozo, my cousin (the same cousin as above) and I were seated at the back. The driver was a bit unstable and we had warned him. Some minutes after, in the bid of trying to avoid an oncoming truck overtaking another truck against our lane and avoid a collision, the car tumbled several times and that was it.

Sozo sustained multiple hip fractures which kept her on the bed for three months. My cousin had a femur fracture and is now better. But I had a spinal compression on my c5c6. I went through surgery and subsequently sustained a bed sore of 7cm deep and 5cm wide and 7cm long. I was transferred from the  National hospital to Zaria teaching hospital. As soon as Sozo dropped her crutches, she came over to be with me and has since been nursing me from January 2017 till date.

Sozo has stood by me till date, she has been my strength, my courage, my push to keep my will going and she has this unwavering belief that I’d walk again. She never doubted not once and I strongly believe I will. I marvel at her strength. I know God is her source of energy. Even after her going through a lot, losing her mum, her jobs, her home, she kept her life at a pause, just to help me back up and it is mind-blowing. If the world celebrates her, I would be fulfilled. She is my light. So I call her “Meira meaning “Light”. I call her “Oluwatumininu” meaning “God has given me a soothing relief for my soul”.

I love her and she deserves the best. Getting married to her was a step of faith and proof of love and God made it a glorious and unforgettable experience. We trust God that things will and are getting better even as we start a new home despite all odds. Truth is, life is not about conditions but the positions that we create for ourselves. We may have as well decided to keep looking at the condition and stay sad and discouraged but knowing that where focus goes, energy flows, we didn’t allow our condition to determine our position.

So back then in the ICU, I got inspired to write a book and titled it”30″ (Thirty). It is a gradual collation of simple principles and lessons I picked up surmounting the prevalent challenge I was facing. I finished successfully and dedicated it at the wedding just as God had shown me back in the ICU.