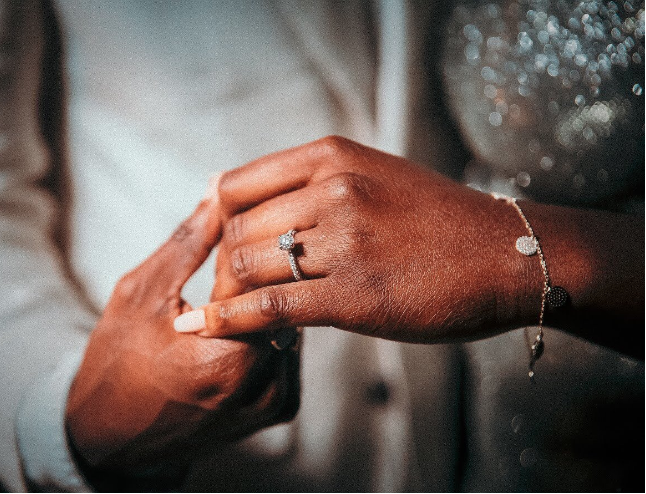 It was her birthday and she was oblivious of his big surprise, she knew him being who he is would definitely do something sweet as usual. What he did however, was way sweeter and bigger than she expected, he proposed in a totally sweet way. Samuel on his part planned to propose on the beach but ended up doing it in their hotel room, but it was an amazing one for Anne. Excited bride-to-be Anne shared how he proposed when she said that:

Week of November 12th, 2018, my best friend Oyin got a call from Sam, asking her to help him with the final touches for “operation proposal”. At the time of the call, Oyin was actually on the phone to me, but of course, had to act “natural” and told me she had to attend to something and would call me back. I didn’t suspect a thing. I had been planning my 25th birthday in Dubai for about a year prior (#25onthe25th). On November 21st Sam, myself and 8 of my friends flew out to Dubai.

On the Eve on my birthday, we all went to a rooftop bar and I started talking to Sam about when he was thinking to propose (because at this point in our relationship we were at a mutual understanding that we will be getting married in the near future, but it was all about when he would pop that question and propose!). He said he was sure he wanted to marry me but he was just building up the courage to make it official. I asked him if he had an idea of where it will be or when it would be, and he responded saying he hadn’t thought about it yet, but he would choose a moment when all my family was around. But at this point, my family was thousands of miles away, so I had dismissed the thought of it happening in Dubai.

In the evening of my birthday, Oyin approached me and told me that she had a birthday surprise for me and that we would need to go there before we would meet the rest of my friends at the restaurant I had made a reservation with. Of course, I believed her words and followed her lead. She ordered us a cab and as we got closer to her “birthday surprise” for me, she asked me to close my eyes and warned me not open them until she gave me the go-ahead, I agreed.

She guided me hand-in-hand to the location, and as soon as we arrived she started crying saying that she loved me and wishes me only the best, even before she could give me permission to open my eyes, it was so sweet, she is a true best friend, even more like my sister. I opened my eyes and saw a trail of red roses on the floor and sweet music in the background, from that moment my mind and body was on “autopilot” because still till this moment it is hard to remember what was said and even how I responded but thank God photos and videos that confirm I joyfully and promptly said yes to Samuel’s proposal.