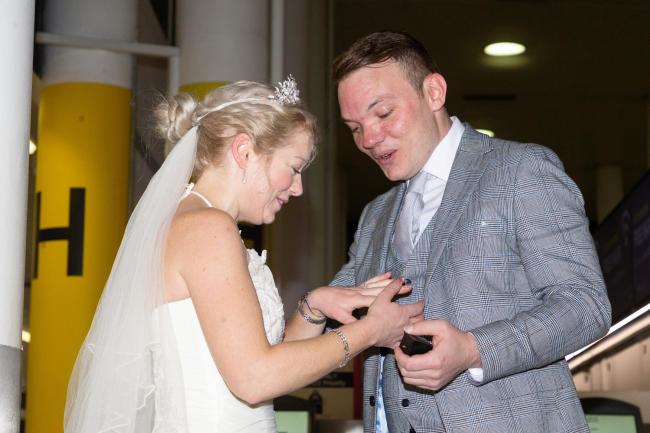 Fate or adventurous love? Sarah and Paul didn’t leave anything to chance as they walked down the aisle together just ten days after meeting on a dating app. Sarah Edwards, 34 and Paul Edwards, 36 decided to tie the knot in Las Vegas on December, 25th. The couple has been married for five days now and claims all is going well with their marriage. According to a report by Metro Uk, The couple admitted to not being able to keep their hands off each other since they met on Christmas day.

The bride, Sarah, told Good Morning Britain that: “We’re always holding hands, always hugging and kissing. It’s like I’ve known her all my life and this is like my missing link.” Affirming her story, Paul also added that: “Our first kiss was our wedding kiss and there are not many couples that can say they never even kissed before they’ve made that commitment to each other”.

Relating how they won her family over, Sarah also added that: “I think it says a lot about who he [Paul] is that he could win them over in half an hour. ‘They were fully supportive of us, and the same with your children and family, even though they haven’t met me yet. But I can’t wait to meet them.”

The couples relationship was fast-paced as the newlyweds after matching on Bumble on December 15th and exchanged messages and spoke to each other for the first time on December 22nd, they decided to marry each on the 23rd despite never meeting face to face.

They committed to each other and booked a wedding venue at the Bellagio Hotel and Casino. Meeting for the first time at Gatwick Airport on Christmas Eve, the duo boarded a plane in full wedding gear and jetted off to Las Vegas to get married. Paul who is from Chichester, West Sussex, has two daughters aged 13 and 15 from a previous relationship.

He was engaged earlier this year but his partner broke it off. While Sarah from Kent is divorced and still lives with her ex. Despite the strange circumstances the Edwards are convinced their union will work as Paul added that: “I love Sarah for who she is and just likes marriages across the world, we will grow to love each other.”